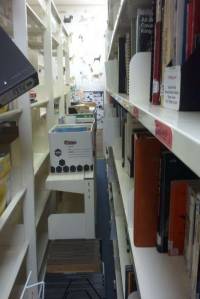 Since the Library Committee was formed in 1994, dozens of volunteers have worked tirelessly to make the Library what it was before its closure. To dismantle it, however 'temporary', is an insult to the work of these volunteers. It is also an insult to the many donors of private collections who believed their treasures would be always be available for the use of dog enthusiasts.

Written into our VCA Constitution is the Privilege of Membership to access the Library. By denying this access, one might correctly question whether the VCA is in breach of its own Constitution! It would be interesting to seek a legal opinion on this.

But it is currently, to quote their website, 'temporarily closed until further notice'. At the time of writing, this 'temporary closure' has already lasted over 5 months with no time-frame or undertaking given about when it will re-open. This cannot occur until the 'temporary' wall is removed. But then shelving will need to be replaced and the corresponding damage which has occurred, undertaken.

The excuse for this demolition was because the VCA office needed more space! With alternatives overlooked, for security a 'temporary' wall was built right down the middle of the Library, halving its floor space. The removed shelving was dumped sideways down the aisles, with all the material it housed thrown into boxes jammed into the remaining floor space. Access to the collection is now impossible.

A Requisition for a Special General Meeting signed by more than 200 VCA members has been lodged demanding the immediate restoration of the VCA Library. With the purchase of a new office building already erected, this invalidates any excuse preventing this work from commencing.