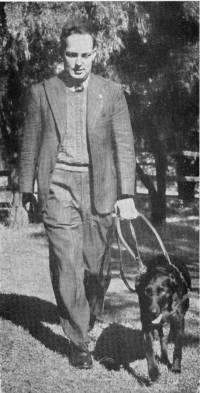 The Labrador and the Chesapeake Bay are both Retrievers developed on the East Coast of the North American continent. They were both strong swimmers and retrieved game for shooters, especially from the sea. But in the developed world, while the Labrador has become one of the most popular breeds, the Chesapeake remains relatively rare.

One reason for the Labrador's immense popularity world wide is his exceptionally good temperament which makes him an excellent family pet. But he is also legendary for fulfilling a variety of other roles like as a Guide Dog for the Blind, an Assistance Dog for a person with a disability, a Police and Customs Detection dog, and as a tracking dog for missing persons. But this immense popularity has only increased to what we enjoy today only during the last century. As we follow its development, in hindsight it is interesting to consider that as recently as 1907 it was predicted:

"That the Labrador will ever be appreciated by the rank and file, and become a popular show dog, I very much doubt. He somehow does not lend himself to it...[1] "

History of the Labrador Retriever 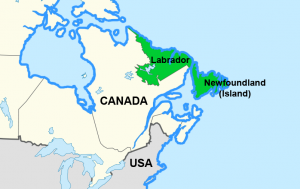 Province of Newfoundland and Labrador

The Maritime Archaic Indians who occupied these lands some 9,000 years ago, relied on seals and fish to provide them with food and clothing. Over the next few centuries, these early Indians were replaced by two separate tribes of people, the Inuits who occupied Labrador and Beothuks who occupied Newfoundland. Archaeological evidence proves these Indians lived in a traditional way on a diet of fish and harp seal which provided the fur, meat, and bones utilized for food, clothing, and shelter[2]. So with plenty of fish and seals close by, there was no need for dogs to assist with hunting or sledding.

The Vikings explored this area in 1001 AD but must have found it too inhospitable to settle. But in 1497 John Cabot discovered what is now Newfoundland and claimed it for Henry V11 of England, bringing back stories about the amazing abundance of fish. Over the next century, a British colony was established, relying on the fishing industry. The dogs they brought with them became well known because of their excellent ability to swim, negotiating the rough seas to catch the fish that got away and delivering them to hand. The dogs also assisted sailors that fell overboard and towed ropes from the boats to anchoring points. 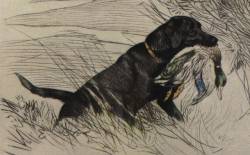 The Labrador we know today was named after that part of Canada's Province where they first developed. At first he became known by three different names, the lesser Newfoundland, the St John's dog and the Labrador. After areas of Canada were cleared for sheep farming, in 1885 changes of laws in both Canada and England ended random trade in dogs between the two countries. But the Labrador had already became famous in England as a retriever that could not only swim strongly, but also scale a stone fence with a hare in his mouth. So it was the British gentry who developed Labrador Retriever into the breed we know today with brains and beauty, the perfect shooter's assistant as well as a show dog. He was was recognized as a pure breed by the Kennel Club UK in 1902 and first competed in the Field Trials in 1904. 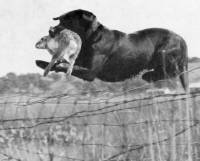 History of Labradors in Australia

At the first dog show held in Melbourne in 1864[4], listed are twenty-two Newfoundland (Large Breed) and five Newfoundland (Labrador). In Tyzack's Annual[5] , there are twelve Newfoundlands listed as being imported from England between 1869 and 1893 with no indication as to whether these were pure breed Labradors or not. As the Labrador was only recognised by the Kennel Club (UK) in 1902, there is barely a mention of Labradors in the reliable reference of 1897, Beilby's 'The Dog in Australiasia'[6]. So these very early imports were probably imported purely as field dogs because both Newfoundlands and Labradors are listed in Tyzack's Annual[5] as not being represented or having any registrations in 1911. 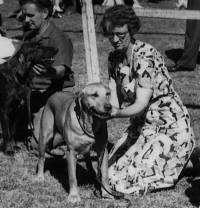 Anna Spanswick in the 'History of Purebred dogs in Australia'[8] substantiated this, stating that the first registered Labrador arrived here in 1929. The 1938 KCC Annual[7] states that it was surprising that little was known of the Labrador in Australia considering his innate qualities and popularity in England. This writer, Professor Gibson must not have realized that Miss Hilda Lascelles (pictured) had become involved in the breed by that time, bringing seven imports from top English bloodlines into Melbourne from 1933 to 1946. She was a clever and astute breeder and her Winlaton prefix laid a solid foundation for the Labrador Retriever in Australia. After the Second World War, the Labrador rose quickly to the popularity he enjoys today with 67 being entered in the 1948 Royal Melbourne Show[9].

In the field, Water Tests were first conducted by the Labrador Retriever Club of Victoria in 1952, Field Trials in 1953 with Retrieving Trials gaining Championship status in 1957 with Mr Jack Pontin officiating[10a]. 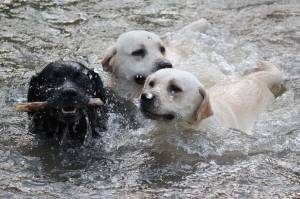 The Labrador is strong, hardy dog who is so good tempered and willing to please, today he has been adapted for many purposes. He stands 55 - 57 cms (21.5 - 22.5 inches) tall and comes in black, yellow or liver/chocolate. Originally bred as a strong swimmer, he must be substantially built but never coarse, with depth through his chest and ribs and strength through his hindquarters. He has a broad head, a short thick dense weatherproof double coat and a tail that resembles an otter. 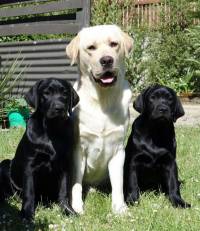 The head should be in balance with the whole body. Although the skull is broad with a well defined stop, the cheeks should not be fleshy as this can make the head look coarse. The broad skull supports his very strong jaw and although it should have sufficient width to gently carry a hare or bird without biting into it, it should close with a normal scissors bite. The nose must be large with well developed nostrils and although it is usually black, it can be brown or liver in the case of chocolate or liver coloured dogs, but never pink. The eyes give the Labrador a kind expression, so should be of medium size and brown or hazel, blending into the coat colour. The ear flaps have to protect the orifice of ears when the dog is swimming so they should be set high and close to the head but should never be large or heavy. Correctly set and placed ears also complement the Labrador's kind expression.

The neck with its clean throat should be long enough to balance the body yet have sufficient strength to carry a hare in its mouth. The well laid shoulders with which the upper arm forms a 90 degree angle, also gives the dog balance so he can carry game. The elbows are set under the dog in line with the withers. The front legs have good strong bone and the pasterns have sufficient slope which, together with the cushioning of the dog's round, compact feet, act like the dog's shock absorbers. The chest should be wide and deep with an obvious prosternum. Although the ribs should be well sprung, when looking over the dog there should be a visible waist so does not look fat and in profile some tuck-up should be evident.

The topline should be level and not slope to the set on of tail. The coupling is short and the wide loins support the very strongly muscled hindquarters with their well turned stifles and short hocks. The otter shaped tail is one of the Labrador's most distinctive features. Carried gaily when the dog is gaiting, the tail also acts like a rudder when the dog was swimming so it must be covered by the Labrador's double coat which comprises of a short thick dense top coat as well as undercoat. The Labrador moves at a steady pace with a balanced free and effortless stride.

"I think one of the dangers the breed need fear today is that it may become what one might term too 'pretty-pretty' as some dogs have not the strong, workmanlike, even rugged look so characteristic of the breed. 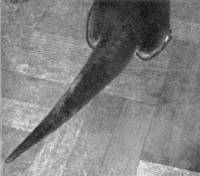 The Tail of an Otter

They originally gained popularity through their unequalled working qualities and it behoves (our duty) us not to let those be lost. Strong hindquarters are an absolute necessity for a retrieving dog - in fact for any dog - for on these mainly depends the true movement of the dog. For a retrieving dog strong hindquarters give the power to jump and negotiate obstacles even when carrying a hare. I know that a good head makes a strong impression but a head is no good without a good body behind it, a body that is short and compact with good spring of ribs, deep through the heart, with powerful hindquarters, standing four-square with plenty of bone and good feet. Add to these qualities an otter-tail and you have the ideal Labrador".[3]

History of the Chesapeake Bay Retriever

Situated on the east coast of USA, Chesapeake Bay is well south of the Canadian Island of Newfoundland. But in 1807, an English sailing ship returning home from  Newfoundland became wrecked somewhere off this rugged icy coastline. Two puppies were rescued along with crew and other cargo somewhere near the area of Chesapeake Bay. Despite the severe winds that blew off the icy ocean, these puppies became so efficient as retrievers of wild duck and waterfowl, that many local nondescript bitches were bred to them. Over time, they developed into the the strong Chesapeake Bay Retriever we know today with its distinctive brown coat. The Chesapeake Bay Retriever was recognized by the AKC in 1918.

History of the Chesapeake Bay Retriever in Australia 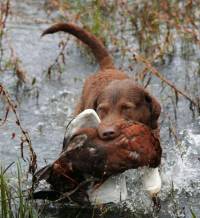 In Australia the Chesapeake Bay Retriever was introduced in 1979 when Hank and Betty Dobrowolski from NSW brought Ch Arnac Bay Buzzard from UK. Then in conjunction with Margaret Wedgwood and Trevor Lodder from Queensland, Ch Arnac Bay Daybreak followed with the first live litter born in 1983. From these beginnings the 'Chessie', as he is popularly known, has earned a distinct place among our Gundogs[11].

The Chesapeake Bay Retriever is a powerfully built athlete standing 53.34 to 66 centimeters (21 to 26 inches) high and weighing 25 to 36.32 Kilograms (55 to 80 lbs). His double coat which can be any shade of brown and about one and can be a half inches long in places but always comprising of an oily outer coat and thick undercoat. The skull is broad and round with a medium stop and about the same length as the muzzle which should have sufficient strength to carry large game birds and close with a normal scissors or level bite. The wide set eyes are medium large and are of a yellowish or amber colour. The ears are small and set high. 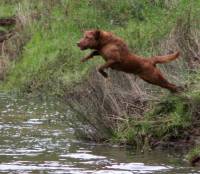 The Chesapeake has a medium length of neck which should balance his medium length of body and medium length of leg. Unusually, because his hindquarters are so powerfully built to enable the dog to swim, they may tend to make the topline look slightly higher at the rear. This dog also unusually has good sized hare feet which have webbing between the toes also to enable him to swim. But on land, his free and effortless movement gives the impression of great power and strength with balanced reach and drive.

Comparison between the Labrador and Chesapeake Bay Retrievers

[4] Catalogue of the First Exhibition of Sporting & Other Dogs, Thursday & Friday April 7 & 8, 1864 promoted by the Council of the Acclimatisation Society, printed in Melbourne by Mason & Firth, Printers, Flinders Lane West Page 12

[6] W. Beilby 'The Dog in Australasia' published George Robertson & Company in 1897 Chapter on The Retriever Page 257

[7] Professor A Boyce Gibson, 'The Labrador in Australia' KCC of Victoria Annual 'On the Bench and in the Field 1938' published by F C Morant 7 Crimea St St Kilda printed by the Horticultural Press Pty Ltd., 78a Victoria St Melbourne Page 8