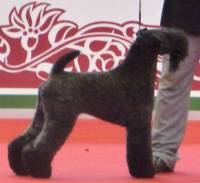 Kerry Blue TerrierA game terrier with 'an open coat' has been in existence in the South and South Western parts of Ireland since the earliest settlements. Their colour ranged from wheaten in all shades to that of bright red[1]. But in County Kerry the black-blue colour was most prevalent, their coats were inclined to curl and the dogs were undeniably game[2]. As these two modern breeds are of a similar size and also had a common origin and purpose, they are studied here together. 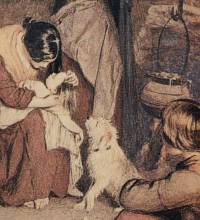 This portion of the wonderful 1841 painting by Frederick William Burton of a fisherman's drowned child is the earliest documented evidence of any terrier of Ireland. Like the Irish Terrier, the predecessors of what we know today as the Soft Coated Wheaten Terrier have been owned by Irish peasants for centuries as general farm dogs which protected small badly fenced plots of land[2]. 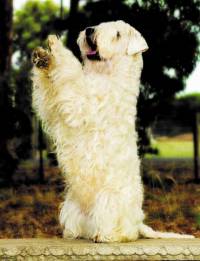 There is speculation that in the late 1700's a dog that was dark coloured swam ashore from a shipwreck and mated local terriers to produce a dog with a dark blue coat[3]. However, it is more likely that some surreptitious matings occurred between the rich landowners' Irish Wolfhounds and the peasant owners' wheaten coloured terriers. Both these theories would point to the Soft Coated Wheaten Terrier being the older of these two breeds. 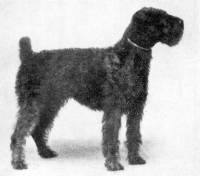 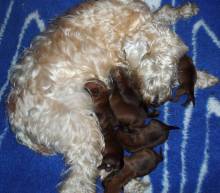 But their common origin is evident today because Soft Coated Wheaten Terrier puppies are born dark chocolate to red with dark masks on their faces which usually lightens as the coat matures. It is acceptable for some dark shading to be present on the ears and around the mouth even as an adult.

The Kerry Blue is also born with a black mask as well as black points or totally black with its coat and colour lightening to blue as the dog matures.

History of the Kerry Blue and Soft Coated Wheaten in Australia 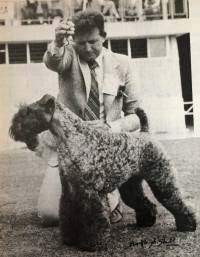 The first Kerry Blue introduced into South Australia in 1930 by Dr Kyle Gault[5]. But it was David Roche also from South Australia who really with the importation of many great English and American Champions. Always immaculately presented, David and his Kerry Blues dominated the show scene across Australia for around three decades.

But it was late 1979 before the first Soft Coated Wheaten Terrier arrived in NSW[5a]. If any Kerry Blues and Soft Coated Wheatens arrived with our early settlers as documented in the history of the Irish Terrier, as neither was recognized as a pure breed here or in Britain at that time, there is no record of any such arrivals.

At a glance the Kerry Blue and Soft Coated Terrier may look the same breed with just a different coat and colour. But decades of selective breeding to a Breed Standard has now made each of these quite distinct. With their basic construction typical of the long legged terriers, their specific breed characteristics are summarized in the table below: