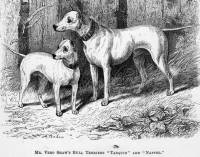 Bull Terrier enthusiasts were so proud of this breed's courageous history, he became known as 'the Gladiator of the Canine Race'. Then political correctness intervened! Today, the history of the Bull Terrier remains testament to how admirers resurrected this wonderful canine to its original physique with his unique egg-shaped head.

History of the Bull Terrier 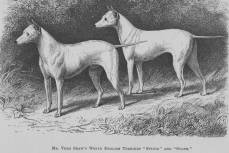 Although the progenitors of The Bull Terrier were almost certainly gladiators, James Hinks strain we know today was created as a show dog for the new middle classes. The foundation bitch of the strain, Hinks Puss was first shown at the Holborn Show in 1862 and took first prize in the class for the breed. 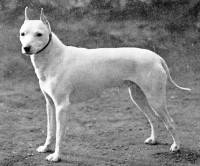 Hinks showed his Bull Terrier strain 82 times in 11 years with such success that his line of Bull Terrier became the foundation of the breed to the exclusion of all others. The three generation pedigree of Puss and Madman (the foundation Sire out of Puss) indicates the breeds used were mainly the English White Terrier (now extinct), the white Bulldog and the Dalmatian. 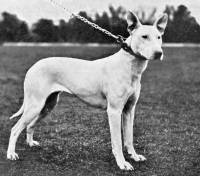 After the Cremorne Show in 1864, John Henry Walsh aka Stonehenge, the world's leading canine authority of the era, described Hinks dogs as "one you might fancy, but not bred to the business". The business, being of course, dog fighting. In England, dog fighting had been banned since 1835. Walsh wrote an expose on the illegal activity in the 1860s in Hinks home town Birmingham, naming places, people and dogs, but there was no mention of Hinks or his dogs, substantiating his claim that they were not bred for fighting.

So James Hinks took the Bull Terrier out of the murky mist of the Victorian metropolis of Birmingham in whose shadow the breed was born. As Jowatt, a well-known dog authority of the late 1800's expressed it "Hinks found the bull terrier a tattered old bum and made him a right 'un, made him a white 'un, a fine dog for a gentleman's chum".This made the Bull Terrier we know today a show pet for the rich who wanted a dog with a hint of a past, but not tainted by the dog pit itself[1].

As dog shows became more popular, the white Bull Terrier with the long foreface was born. But then breeders became so obsessed with head planes that curve gently downwards (the down-face) that the stop essentially became eliminated. Such was the passion which became the smoothly contoured egg-shaped head we know today.

In addition, for almost 70 years, the White Bull Terrier retained almost complete exclusivity. By the late 1930's, through the Second World War and beyond exaggerated heads were selected over those with general sound body conformation. This is why some of these formerly athletic dogs became cripples with such long down-faces they looked like parrot's beaks! This took decades to correct[6]. 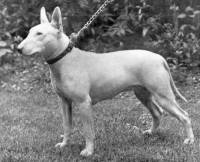 History of the Bull Terrier In Australia

In Australia the first Bull Terriers were imported by 'Plunger' Benson around 1886. Then came a pair 'Trentham Count' and 'Lady' which were awarded top honours by the well-known judge of the day, J C Coupe. This caused such a stir that a band of objecting opposing exhibitors and their dogs were forcibly marched out of the building and given life disqualifications![5]

Bull Terriers were strong at this time with 18 being imported prior to 1907, a litter whelped in quarantine, and a further 85 recorded in Tyzack's Annual[2]. Australia then seemed to follow the pattern of England with white Bull Terriers with exaggerated heads and unsound bodies gradually being replaced by a mixture of white and coloured, well-constructed animals.

History of the Miniature Bull Terrier 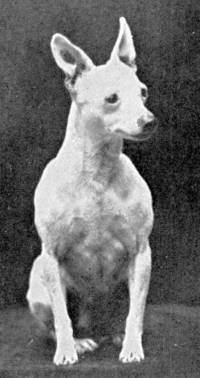 The Mini Bull developed after dog fights were prohibited by law, and rat pits were equally out of the question. But although the Bull Terrier was popular as a companion for men, he was considered too quarrelsome to make him a desirable pet for the ladies! So England developed the Miniature Bull Terriers which, at first were differentiated by weight[7].

From around 1866,there were 20 entries at a London Show for Bull Terriers under 10 pounds, and 3 years later 32 Bull Terriers under 15 pounds. At this time Bull Terriers ranged in weight from 8 to 55 pounds. To maintain their diminutive size, small Bull Terriers became in-bred and difficult to rear. But although small, they always retained their 'distinguishing character'[1] and never became toys like the English Toy Terrier (black and tan). Selling for around the same price as the larger ones, Miniatures failed to improve even under the patronage of the Ladies' Kennel Association who had their interests at heart.

But by 1905, exaggerations had crept in and one was reported as not even weighing 3 pounds! But these tiny ones, even some with an apple domed skull like a Chihuahua, commanded the highest prices. So the allowable weight was limited to up to 12 pounds with the lightest Bull Terrier beginning at 15 pounds[3]. This weight separation, which historically separated the two varieties, lasted until 1918, when the Kennel Club (UK) removed Miniature Bull Terriers from its Stud Books. However, it was revived some 20 years later with a height, rather than a weight limit.

History of the Miniature Bull Terrier in Australia

In Australia, the first record of Miniature Bull Terriers was when a brindle and white pair was imported in 1965. These were exhibited through to 1968 with another pair in 1974. Miniatures then seemed to die out until 1986 when they re-appeared. Although ANKC allowed the English policy of breeding between these two Bull Terrier varieties, all progeny had to be registered as Miniatures. This is still a source of controversy in Australia, as many breeders struggle to produce correctly conformed Miniature Bull Terriers under the height limit of 35.5cm (14 inches)[4]. 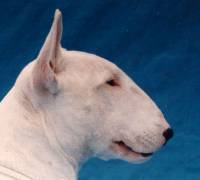 Although the Miniature Bull Terrier has a mandatory height of under 35.5 cms (14 inches), the Bull Terrier has no specified height. Otherwise, these two Breed Standards are identical. Each breed should be substantial but athletically built, have an head egg-shaped head, and the males should look masculine with the bitches obviously more feminine. Each dog should have maximum substance for its size, consistent with quality and sex. Although considered here together, the Miniature should immediately look distinct by its more diminutive height. 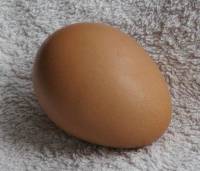 The ideal head of a Bull Terrier is described as being egg-shaped with no indentations from the base of the ear to the end of the muzzle. So what better way to understand an ideal Bull Terrier's head than to think of the shape of an actual egg! You can see by comparing the dog with the egg pictured that the skull is somewhat flat where the egg is widest, and how smooth the contour is as it narrows towards the nose. You can also see how the head planes are described as being down-faced giving the whole head, particularly the muzzle the look of strength. 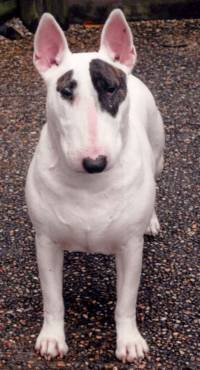 Because of the tight skin that covers the head and the clean tight lips, you can easily see this depth of head in profile, particularly the muzzle. This depth of bone in the muzzle is required to anchor the large strong teeth which form a normal scissors bite. The eyes are as dark as possible, triangular in shape and placed so the muzzle appears perceptibly longer than the skull. Historically cropped, today the small neat erect ears with their thin leathers held stiffly erect complete the finish of this unique head.

Bull Terriers move with a free true action but with a typical jaunty air which typifies his character and temperament. His skin should be tight and the short coat is harsh to touch. He comes in white with or without markings on the head or coloured. With coloured dogs, brindle is preferred but the colour should predominate the white which should be clear and not ticked. While black, fawn and tri-colour are acceptable, blue and liver colour are not.

[7] J.H.Walsh, under the name 'Stonehenge', 'The Dogs of the British Islands' (Fifth Edition) Published by 'The Field' Office, 346 Strand, W.C.London 1886. Book lll, 'Terriers (Other than Fox and Toy)', Chapter ll, Smooth Terriers (other than Toy). The Bull Terrier Page 262