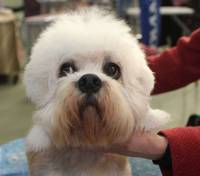 In the 1700's, what are now known as the Bedlington and Dandie Dinmont Terrier were the same breed. Developing for different purposes on both sides of the English-Scottish border, they had different leg lengths for work on top of and underneath the ground respectively! By 1874, they had become two of the oldest show breeds that appeared in the First English Stud Book. Today, they still have significant similarities of general body shape, coat colour and silky topknots.

History of the Dandie Dinmont 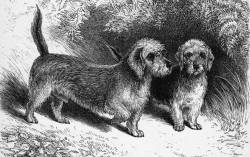 A race of short legged terriers answering the description of Dandie Dinmont was kept by the farmers on the Scottish side of the Border Region before the end of the 1700's. These terriers were sufficiently hardy to hunt any animal from the weasel family which includes not only stoats and polecats, but also otters and badgers. From these earliest times the Dandie was required to have 'a long, low weasley body', words that remain in the breed standard to this day.

How the original Dandie came to have short legs is 'lost in the mists of obscurity'. As Rawdon Lee also wrote in 1894: 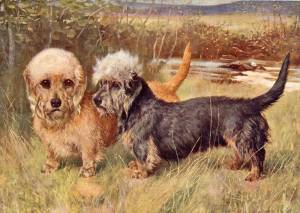 .. it was well known that Border farmers and others kept a hardy race of short-legged terriers, answering to the description of the Dandie Dinmont, even before the end of the 1700's. They assisted the hounds to kill otters, and were hardy enough to destroy foxes in their holes... notwithstanding their short legs and long bodies, were fairly active and as hard as nails[1].

Although the original Dandie was smaller than the modern one, perhaps in an endeavour to obtain greater bone as well as larger heads with stronger jaws, heavier bodies were also produced. So the short legs became entrenched in the breed, as did the long strong body shaped like the weasel he was bred to hunt. 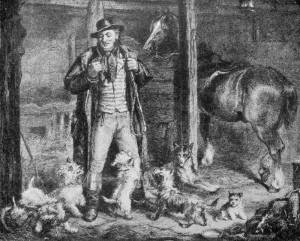 Dandie Dinmont and his terriers

It is recorded that around 1800, a farmer named James Davidson was given a pair of splendid workers that were short on the leg, large bodied, and had large heads with pendant ears. James Davidson, a keen sportsman who owned ten or twelve couples of these terriers, was typical of his time. So when the celebrated novelist Sir Walter Scott published the book 'Guy Mannering' in 1814, he invented the name Dandie Dinmont which seemed to suit typical characters like James Davidson. Names of his dogs included 'Old Pepper' and 'Old Mustard', 'Young Pepper' and 'Young Mustard' and 'Little Pepper' and 'Little Mustard'. Hence the names of the permissible colours of pepper and mustard which remain in the breed standard today.

History of the Dandie Dinmont in Australia 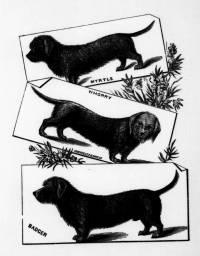 In Australia, early importations of Dandie Dinmonts into Victoria from 1890 - 1903 are recorded in "The Dog in Australasia"[4]. Additionally the attached picture was published in 'The Australian Dog News' around 1890. So it is assumed by the listing of imported dogs that these were brought here by the Mr Clark named on the middle picture. But these early importations must have died out because Dandies are named among the breeds listed in Tyzacks Annual as not being here in 1911[2]. Additionally, we could not find any records of Dandies here for the next 60 years.

In the 1970's Don and Mary MacCaul began importing and breeding Dandies under the Marydon prefix. They rekindled interest in the breed and, in 1990 Dr Emma Greenway became involved. She has imported and bred some excellent specimens under the Jollygaze prefix which have held their own on the all-breeds and Specialist platforms both here and overseas.

History of the Bedlington

Meanwhile the Bedlington developed on the English side of the Border. From the 1700's, Bedlingtons ran with Foxhounds in the Northern Counties. At this time, foxes destroyed so many sheep that hounds and terriers became an essential part of the farmers' households. These speedy terriers were also valued for the sport of rabbit coursing among the miners.

As well as farmers and miners, gypsies also spread Bedlingtons throughout the district. In those days a terrier or two could earn good money from the bounty on the heads of foxes. The skins of otters and weasels could also be sold. In addition, betting on various sports like badger baiting was held where Bedlingtons were bought and sold.

The Bedlington becomes a Pure Breed 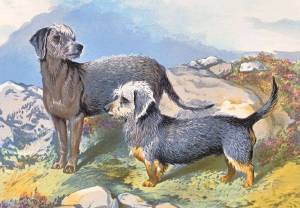 In 1825, a Mr Ainsley claimed the pedigree of his bitch 'Phœbe' dated back back for five generations to 'Young Piper' who was born in 1792. Phœbe was supposedly by Anderson's 'Piper' out of Coate's 'Phœbe' who was bought in Bedlington in 1820. So these early Bedlingtons' pedigrees could reliably be traced back to well before the first English Stud Book was published[6a].

Anderson's 'Piper' was a slender-built dog liver 15" high and weighing only 15 lbs with a linty textured coat and feathering at the tips of his ears. 'Phœbe' was only 13 " high and weighed 14 lbs. She is described as being black with brindled legs with a tuft of light coloured hair on the top of her head[6a]. 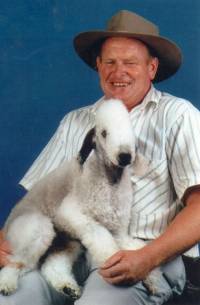 At one of these early dog shows, the Earl of Antrim won prizes in both Bedlington and Dandie classes with 2 dogs out of the same bitch and by the same sire. This demonstrates just how closely these early Dandies and Bedlingtons were related. So today this relationship always be respected.

History of the Bedlington Terrier in Australia 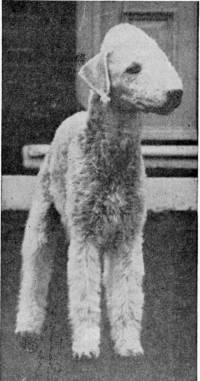 In Australia there is only a brief reference to Bedlingtons being imported here in 'The Dog in Australiasia'[4] and also in 'Tyzacks Annual'[2]. But this breed also appears to have died out until 1964. Then three Bedlingtons including the English Champion pictured[3] were imported into Victoria by Mrs Olive Smalley ("Lynstar"). Shelagh O'Brian followed with another pair from a different bloodline. This laid the foundation for a small band of enthusiasts to follow including Joan and Ken Tucker (Foggystar) and that colourful character, Brian Huxham.

Because of their historical connection, it is interesting to compare the Bedlington and Dandie Dinmont Terriers. Not only are there many distinct similarities, the differences between these two breeds demonstrate the purpose for which these two breeds were originally bred.

Another way of looking at it is by their similarities and differences. These are: 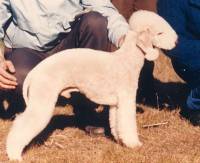 Ears - Thin and lowset on the head and dropped, hanging close to the cheek with a tuft of hair at the end

Coat Texture - Double coat with soft undercoat which feels like lint, but is actually a mixture of hard hairs coming through a soft undercoat

Ribcage - Deep, despite the shape being so different

Hindlegs - Appearing to be longer than their forelegs

Tail - Thick at the root and tapering to a point and gracefully curved or shaped like a scimitar. 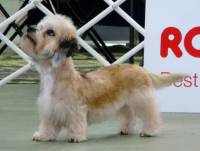 Height - the main differences between these two breeds relate their difference in height at shoulder because of their function. The Bedlingtons are long legged terriers which mainly coursed rabbit and hare above ground while the Dandies are short legged terriers that mainly followed vermin especially weasels underground. So their height corresponds to the purpose for which they were developed. The Bedlington should have a height of around 41 cms (16 inches) with a weight of 8 - 10 kilos (18 - 23 pounds) while the Dandie has a height specified from 20-28cms (8-11 ins) at withers. 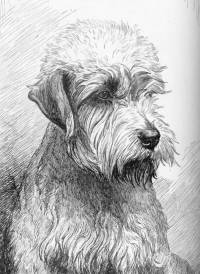 But interestingly while the weight of the Dandie is not specified, the length of the Dandie's body is! So similar to the Skye Terrier that was also developed for underground work, the Breed Standard dictates the measurement from withers to root of tail not be more than twice his height, but preferably 2.5-5cm (1" to 2") less. So the size specifications alone reflect the purpose of the Bedlington and Dandie. Additionally while the Bedlington has the build of being capable of galloping at high speeds, the Dandie has the build that enables him to slither through underground tunnels.

The breed standards also differ in the following respects:

Head  - The Bedlington has a narrow but deep skull with no stop. The Dandie has a large head with extraordinary cheek muscles, with a measurement from inner corner of eye being the same as from ear to ear and a ratio of muzzle to skull being three as to five. The top of the Dandie's muzzle also has a triangular bare patch about an inch wide pointing backwards towards the eyes.

Coat Colour - The Bedlington can be blue, liver or sandy with or without tan markings, obvious when the dog is young. But when adult can look almost white especially livers and sandies. But as they become older and for example, when a bitch has a season and/or a litter, a liver's body can look medium brown with a lighter coloured head and legs. This usually fades again until the next season. In the same way, a blue can become dark whilst also retaining the lighter coloured head and legs. Males can also gradually change with age. This colour is not just the guard hairs, even the soft undercoat look dark on their body.

On the other hand, the Dandie's colour of mustard or pepper at the end of each hair is much more obvious at all ages and gives a look of lying in pencils. 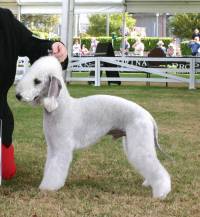 Nose colour - The Bedlington has a brown nose if it is liver or sandy and only the blue or blue and tan has a black nose. But the Dandie's nose must always be black.

Neck - The Bedlington's neck is long and springs up from the shoulders whereby the Dandie's neck is set into its shoulders and therefore carried in a more forward, rather than an upright position.

Shape of Ribcage - the Bedlington has flat ribs whereby the Dandie's ribs are round and drop well between the forelegs.

Front - The Bedlington's forelegs are straight but wider apart at the chest than at the feet. When the dog is standing facing you, four fingers should be able to fit between the forelegs, but this should reduce at the feet to three fingers in width. This unique feature allows the dog to pivot more easily when required to gallop at high speeds. Although the Bedlington is a coursing dog that worked on top of the ground, he still had to be capable of digging into and so entering the dens and therefore has a terrier front

Because the Dandie's ribs are round and the chest comes well down between the short well boned forelegs, the forearms although not bandy, must follow the line of the chest. This can cause the feet to point slightly outwards when the dog is standing. In other words, they have slightly bowed front legs (crooked front). Additionally, when the dog is digging its way through the dens of the weasels it was bred to hunt, it shifts the dirt to the side of his body so the chest followed by the rest of the dog, can slither through the hole.

Feet  - The Bedlington has long hare feet and long pasterns typical of a coursing breed while the  Dandie has round well-padded feet typical of a digging terrier.

Gait - The Bedlington has such power and flexibility in its hindquarters, it can gallop at high speeds at a double suspension gallop. So at a trot its action is described as 'mincing' light and springy at slow paces and with a slight roll at full stride. The Dandie has a typical fluid free stride.

[6] J.H.Walsh, under the name 'Stonehenge', 'The Dogs of the British Islands' (Fifth Edition) Published by 'The Field' Office, 346 Strand, W.C.London 1886. Book lll, 'Terriers (Other than Fox and Toy)', Chapter l, Special Breeds of Rough Terriers. The Dandie Dinmont Terrier Page 236.