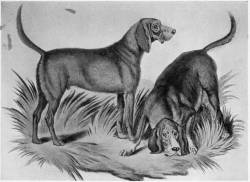 Here we describe the beginnings of our pure breed dog world in Australia. However, it would be 145 years from the conduct of our first documented dog show until our 6 States and 2 Territories would co-ordinate their separate registration systems and Breed Standards. Eventually, in 1997 our Australian National Kennel Council (ANKC) finalised this procedure.

The first Australian Dog Show took place in Hobart, Tasmania. According to a report in the 1862 local newspaper 'The Hobart Mercury', this was conducted by the newly formed 'Society for the Improvement in the Breed of Dogs', which in 1863 changed it's name to 'Canine Society'. The aims of the Society were:

'to encourage Improvement in the Breed of Dogs, especially in the useful varieties and by inducing people to keep a good dog to lessen, as far as possible, the number of useless curs with which the city is at present infested. The Society proposes holding an Annual Show as the best means of effecting their object'

After the Dog Show, the 'Hobart Mercury' reported further:

'An exhibition of somewhat novel character (at least in these parts) in the shape of a bona fide Dog Show, took place yesterday. This we may note, is the first dog show held in the Australian colonies. 91 dogs entered and entries closed one week before the event. Exhibitors were required to record the breed, sex, age and colour of their dogs, also whether bred in the colonies or imported.

Prizes were awarded to the owners of the best bred dogs of both sexes (also to whelps under 6 months old) of any distinct variety or breed provided they were of sufficient merit. Breeds exhibited were Setters, Pointers, Spaniels, and other field dogs, Greyhounds, Harriers, Beagles and Retrievers, Bulldogs, Bull Terriers, Rough Terriers, Smooth Terriers, Fox Terriers, Newfoundlands and Sheepdogs (Black and Tan Sheepdog, Esquimaux, Poodle, and a Smithfield Colley[1].

It is interesting to note that the 'Smithfield Colley had to turn sheep down Hosier Lane, as far as circumstances permitted'. 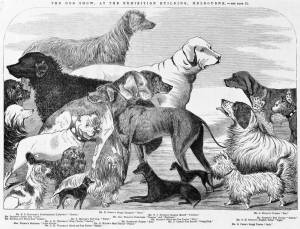 In 1864, Australia's Second Dog Show was held in Melbourne, Victoria. It was conducted by the Council of the Acclimatisation Society. Approximately 1,500 people attended, paying two shillings and six pence each to witness what was reported as 'the singular sight of the Show itself.'[3]

At that time Australia had no dog societies or agricultural magazines interested in recording the pedigrees of the dogs shown. So unless the dog was imported from England complete with its English Pedigree, it was entered in the dog show in the call name of say 'Jack' or 'Bess' P.U. (parentage unknown). The breed assigned to them was purely guesswork. For example, in the catalogue of this Show, of the 381 dogs entered, 30 of them were designated as crossed breeds!

In 1868 another Dog Show as held in the Duke of Edinburgh Theatre with 232 dogs. By 1872, dogs were included in the National Agricultural Society of Victoria's Show which pre-dated the Royal Melbourne Show. Then in 1877 the Victorian Poultry and Dog Society (VP&DS) held its first Show with entries covering the prize money. At VP&DS Shows until 1880, poultry only were then exhibited until 1880 when their Dog Show ran at a loss of £100. In 1881 the VP&DS declared that all dogs must be registered.

The Affect of Federation 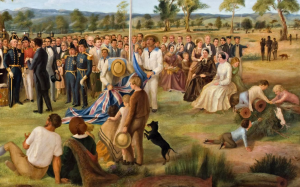 In 1900, Australia became federated. Before 1900, we operated under the British Constitution. After federation we had our own National government independent of Britain. The inefficiencies resulting from each State having its own laws without being co-ordinated across Australia, flowed on to the pure breed dog laws that governed each individual State.

Lack of Autonomy between States

The variation between different State's dog controlling bodies, created a lack of autonomy throughout Australia which became an unimaginable nightmare! Although Australia had only 6 States and 2 Territories, had this situation occurred in USA which had 48 States at that time, there would have been 48 separate dog controlling bodies! ! As it was, our 8 controlling bodies meant it was not only difficult to transfer pure breed dog pedigrees and registrations from State to State, some of the Breed Standards also varied between States. For example the breed we know today as the Australian Silky Terrier began as 2 separate breeds with one Breed Standard in NSW and a different one in Victoria:

Consequently, it was written in 1912:

"Its sire was Australian; component parts were many -
Yorkshire, black and tan, and Scotch - it proved much worse than any.
Another dash of Yorkshire; the result was far more pretty;
They called it 'Sydney' Silky but quarrelled o'er the city"[2]

It would be 145 years from the conduct of our first documented dog show before our 6 States and 2 Territories finally co-ordinated their separate registration systems and Breed Standards. In 1997 our Australian National Kennel Council (ANKC) finally digitised our system and hence this procedure.